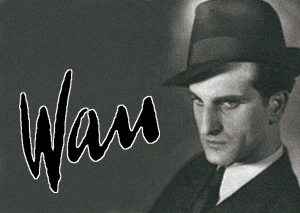 Robert Hans Olschwanger was born in Berlin in 1905 as son of Jewish parents. He grew up in the open-minded liberal society of the German capital and as a young man without any artistic training, he nevertheless developed a fine drawing craftsmanship, doing work both in advertising and on sports themes, as well as in a variety of other areas.

Before the Nazis came to power, he worked mainly for the renowned Frankfurter Zeitung but because of his Jewish origins, from 1938 onwards his drawings were no longer published.

In the meantime his sister, Ilse Olschwanger had emigrated to Peru with her family and in 1939 was able to secure immigration for him and their mother. In Lima, the capital city of Peru, he developed his astonishing talent as a political cartoonist, working for a daily newspaper under the pseudonym of ‘Wan’.

In his cartoons, he followed the news on world politics and translated them into ironic, sharp and visionary impressions and commentaries. Nowadays most of the drawings require no further explanation and his critical sense of humour is evident. Of course, being published in Peru, the captions were in Spanish.

In the early seventies, Robert Hans Olschwanger returned to Germany. He died at the age of 93 in Cologne.

This website is an effort to keep alive the legacy and memory of a remarkable personality.